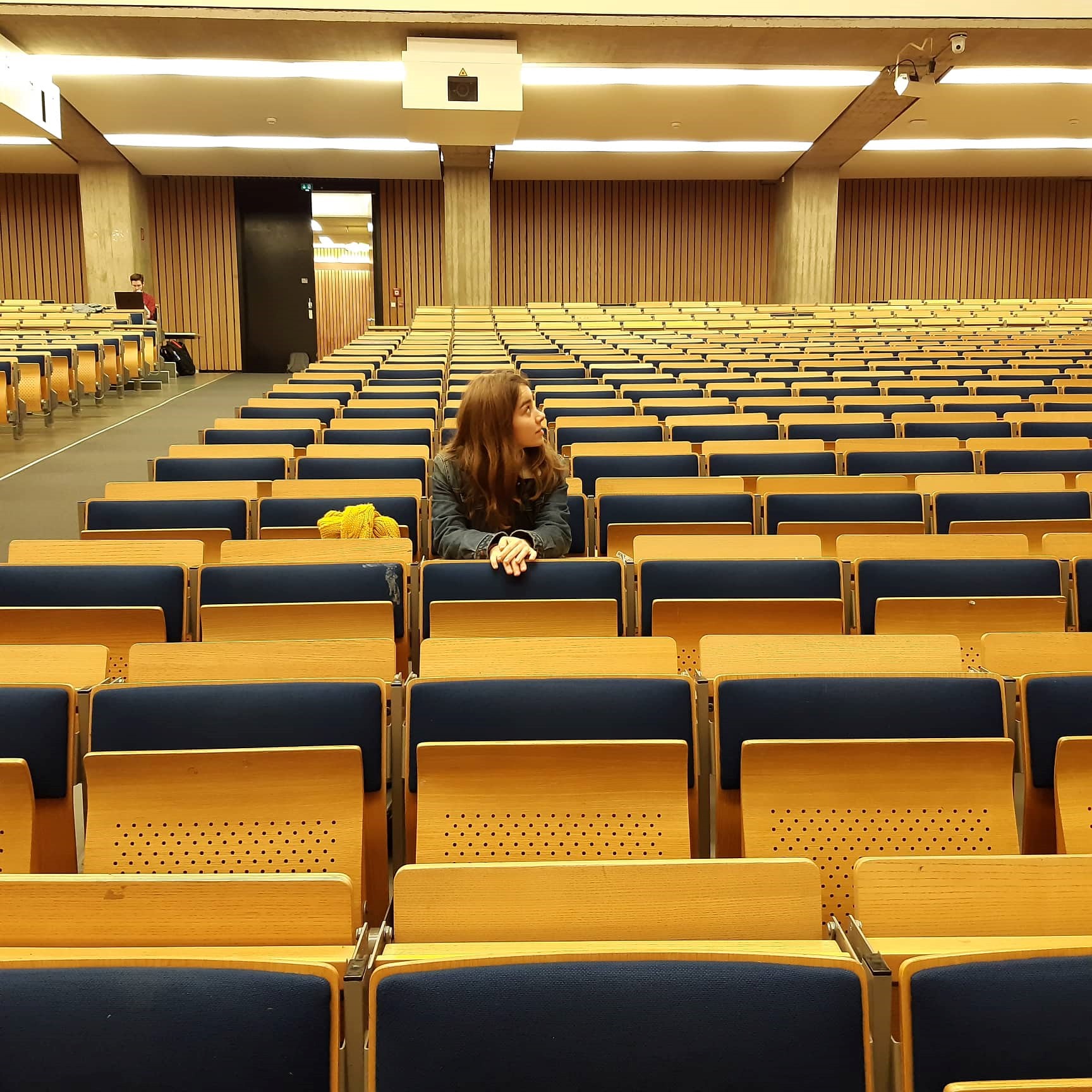 Alina Mamulat at the Technische Universitat Berlin, in a 1500-space amphitheatre ©Ana Rozîpalivanov

Between the 2004 census and 2014, Moldova’s population decreased from 3.3 million to 2.8 million. People were convinced that they live in a country with an unsafe economic system after 1$ billion was stolen from three Moldovan banks in 2014. This explains the fact that, from 2014, Moldovans started to emigrate with their families. The people who remain ask themselves where is that billion dollars? Who organised the robbery? When would they be held accountable and how will the country deal with this huge lack of public money? Finally, how could this have happened in country which calls itself democratic?  The questions still remain open.

Authorities restrict the publishing of the real number of citizens in the country, so there are no real statistics. On an official site, the NBS posted a statistic evaluated from 2018 to January 2019. Provisionally, the figure is 26,817, 000, and it was obtained by looking at the number of residents, which means that an unknown number of people who live abroad, but have their residence in the country, was counted as being in the country.

Asked what they think about the education system and its main problems, young people responded that there is a big gap between the employers’ requirements and theoretical knowledge. They also feel they are kept in the dark because of the corruption in the education system. An article published on the most credible journalistic site called agora.md says that, even if corruption in the education sector is decreasing a little, education is still considered the most corrupt field. In February 2018, in an IRI survey, over 20% of citizens declared that the most corrupt civil servants are professors, together with doctors and policemen. So, it is clear that young people started to leave in search of a better education.

The effects of migration on education are harsh, as the National Bureau of Statistics shows:

So, it is a crisis of teaching personnel, too. The situation is getting worse and many young people are choosing to leave the country looking to complete globally-recognised degrees. One of the countries in which Moldovans want to study is Germany. A quick search on google explains why Moldovans prefer to choose Germany as a destination for studying for their bachelors’ and masters’ degrees. According to www. studyeu.org, the benefits of studying in Germany are:

According to the 2019 German International Student Statistics, over 374,951 international students were enrolled in German higher education institutions.

In an attempt to understand what the real, particular problems of today’s youth are, I interviewed four of them: Alina Mamulat, Vasile Pop, Natalia Chian and Olga Cobuscian. Three of them are studying now at Berlin universities. Thanks to the Erasmus+ programme, Natalia Chian studied in Berlin for a year during her studies at the University of Bucharest.

Please meet Alina, she is from Chișinău, she is 24 and has lived in Berlin for five years, studying Mechanical Engineering and Transport Systems. She started to think about studying in Berlin because she fell in love with Berlin when she saw it for the first time. From the beginning, she was sure that she would study abroad. She studied German at home, and attended German language courses. Alina does not feel that people have been distant with her. She herself felt at ease with other students and she integrated quite well and quickly. After one semester at the university, she went home. “I experienced a culture shock when coming home, I knew that I wanted to go back to Berlin”.

Alina does want to return home, but only if she can find a job and work remotely for German companies. Asked about what problems she perceives in the education system, she said that she would like to see investment made in technology, she would like it if students could have more practical courses. A good example for her are everyday courses, where they study through experiments. She also likes the style of teaching in Berlin, “At home, they teach us how to learn and how to study, here you are by yourself, nobody tells you to study today – you’re responsible for your success. Another strong part of the educational system in Germany is the constructive critical feedback from the professors”. She said that people are more organised, polite and smiling. At the question as to why she decided to study abroad, she said she just wanted to be more independent.

Please meet Natalia, she is 24. She studied foreign languages and literature at the University of Bucharest, Romania. During her university studies, she studied a semester in Berlin with Erasmus+.  When she was in a position to decide where to study, she looked for the quality of the studies and price, compared Moldovan and Romanian study systems, and came to the conclusion that she needed to find a university in Romania. Natalia considers that, in Moldova, only a few universities offer high-quality education. After a week at the Moldova State University, she understood that she wanted to achieve another level of knowledge. So, in February, Natalia will be finishing her Master’s Degree. She lives in Bucharest, and works as a teacher at a company that offers courses of English for all ages. She does not want to return home. The logic is simple; “over the years, there have been ever fewer reasons to visit Moldova”, and the only certain reason for her to travel there is to visit her mother. Most of her friends live abroad, and actually meeting Natalia is a good coincidence – she is a friend of Alina Mamulat, in Berlin whom she came to visit a friend.

Natalia consider that a big problem for the Moldovan study system are the professors without suitable skills. Comparing professors from Romania with Moldovan ones, she said: “My professors went abroad and came back because they have something to fight for, in Moldova nobody comes back because they don’t have anything to fight for”. A difference she noticed was that, in Romania, people work more in groups, this did not happen in Moldova, and that is why we grow up as individualists, suspicious. The principle is to do something by yourself, but to do it better. We do not trust the work of others, and this is sad.

Vasile Pop studies IT Technologies at the Freie Universitat, Berlin. He studied a year at the Moldova State University, because he applied a little bit too late for the university in Berlin. Asked why he decided to study in Berlin... the answer was unexpected: “I studied in a Romanian-German high school, there was a feeling there, right from the first class, that they prepared us to be emigrants”

Vasile said that he left in 2016 when the situation in the country was very unstable. He has a friend, so he accommodated very well from the beginning. He does not feel that he has integrated, although he knows the language and has a job and friends in Berlin. Vasile would like to return to his home country to implement a project, to be helpful.

Olga Cobuscean is 22 and she came from Chișinău to study architecture in Aachen. She came to Germany because ever since she was a teenager, her parents had asked her to study abroad because they think that, in other European countries, the studies are better. She attended German language courses in Moldova, but found speaking German to be a little complicated. Olga’s fellow students and colleagues supported her from the first minute and now they are good friends. She is well, she said she adores Germany and the German mentality. The Germans are open, she said, they do not judge. She adores the fact that people do not look at others’ aesthetical appearance, they do not care, they just accept you how you really are.

Olga does not want to go home. She feels great now in Germany. Maybe she will move to another country where she could speak German.  She has spoken with other people about the Moldovan education and she thinks the system is not so bad; however, the advantage of the German system is that, after the 9th grade, the students are able to choose for themselves what they want to study.

Moldova’s youth does not see the future in black and white. There is hope, deep inside, that some of them would like to come home and create light in the places where people do not see it. However, it is an individual choice to leave or not to leave a country where, both politically and economically, things appear to be getting worse. 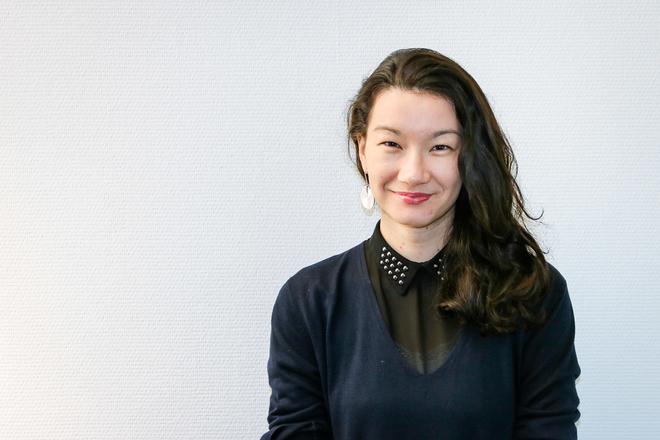 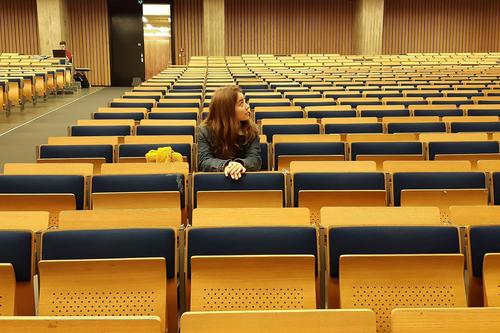 According to the National Bureau of Statistics (NBS), the number of students fell this year. Research shows that 4,700 (8.5%) fewer young people decided to submit their documents to state universities. In the last seven years, the number of students has decreased by 40%. Does this means that the youth does not need higher education any longer? If so, why? Or, is it a phenomenon of migration?
Read more