The Last German of Mariewka

Until 1940, around 150 German villages existed in the historical region of Bessarabia in the area of modern Moldova and Ukraine. Being abandoned and then repopulated after the war, they face the same problems today, as the rest of the country.

A thick impenetrable grey lies over Marianca de Sus. It is one of those days where it is hard to tell whether it is still morning or already evening. The village consists of two parallel lines of properties which are separated by a row of fields in between. Behind each line, endless corn and potato fields that frame the foggy sky with a harvested brown. Strolling along the nearly two-kilometre-long main road, only twelve houses can be counted. Most of them stand alone, often next to empty lots where there once might have been buildings. Now, cows are grazing there. Together with all the chickens, geese and dogs, they outnumber the human population by far. Thus, it is all the more remarkable that I run into Pjotr Feller, the last German in the village.

Until the Second World War, Marianca de Sus was known under the German name of Mariewka. Founded in 1892, it was one of the numerous German settlements in the area of Bessarabia, then part of the Russian Empire. After the Russian Tsar Alexander I defeated the Ottoman army in the fifth Russo-Turkish War in 1812, an area between the Prut and Dniester rivers came under Russian control. The Tsar sought to populate the mostly empty, yet fertile, steppe lands in the proximity of the Black Sea coast, which today is part of Moldova and Ukraine. To further the economic development, and to help modernise the agrarian society of Bessarabia, he chose to invite German settlers, who were granted privileges, such as religious freedom, exemption from conscription and a large piece of land. The Germans mostly came from the Southern region of Swabia and saw the opportunity to escape hardship and religious discrimination in their homeland. While especially the first generations of settlers struggled with harsh conditions, the community became prosperous over the years. Up to 1940, around 150 German-populated municipalities were established all over the region. Still, despite living in the area for over a century, contact to non-German people was limited to trade relations. The settlers stuck mostly to themselves and even continued talking their local German dialects from Southern Germany.

At its peak time, more than 50 farms were running in Mariewka, and even a new settlement called Neu Mariewka was founded only one kilometre to the west. Yet, by the end of 1940, most of the farms were empty. In the commotion of the years between the world wars, the control over Bessarabia had switched to Romania. The newly-established Soviet Union, however, never formally accepted the loss of the strategically important lands. In a secret supplementary protocol of the Molotov-Ribbentrop Pact, Nazi Germany and the Soviet Union decided over the fate of Bessarabia: At that point, Hitler called the by now nearly 100,000 ethnic Germans in the region home, so that the Soviet Union could integrate the lands into their territory. To justify the deportation of the Germans, who had lived in the lands for generations and built prosperous existences from scratch, the Nazi propaganda called the campaign ‘Heim ins Reich’ (back home to the Reich). However, the Bessarabia Germans were never meant to go to the Third Reich. Instead, Hitler planned to use their agrarian experience to populate the freshly conquered parts of Western Poland and to take over the farms of Polish farmers, who were then to either become farm-hands of the new owners, or be immediately deported.

In Bessarabia, from one day to the next, the flourishing farms were abandoned. Most of the Germans’ livestock and belongings were left behind in what had been their homeland for over a century. After the chaos of the war, when for a few years the area fell back into the hands of the Romanian regime, the northern part of Bessarabia became part of the Moldavian Soviet Socialist Republic and the south was assigned to its Ukrainian counterpart. The former German farms were partly taken over by local people who had not owned property before, and partly transferred to kolkhozes and sovkhozes, collective and state-owned farms. Later, ethnic Germans from other parts of the Soviet Union resettled in Bessarabia, too.

One of them was Pjotr Feller. “My family came from Siberia in 1963. My great-grandmother was already living here and then my father and his brother decided that we should all settle in Marianca de Sus, as the village was already called back then”, he says, browsing through old pictures and postcards in the living room of his house. His wife, Lydia, joins us with a packet of instant coffee: “Look, even our coffee is German”, she says jokingly, pointing to the German brand on the package. “Back in the 1960s, many German families lived here, but one after the other left for Germany”, Pjotr adds. Despite their roots, most of the newcomers to Marianca de Sus could not speak German. Pjotr’s grandmother had taught him the language when they were still living in Siberia, but as his family stopped using it as soon as they arrived in their new home, he quickly forgot it.

Pjotr’s case is no singularity as Dr. Dorin Lozovanu explains. The Moldovan geographer conducted research on the former German villages in today’s Moldova and the neighbouring breakaway state of Transnistria. “In the aftermath of Stalin’s death, many ethnic Germans, who were deported to Siberia in the years of the Great Terror, were allowed to come back to their homeland”, Lozovanu states. However, the families were not granted permission to return to their former villages, as the researcher further points out: “In some interviews I conducted, the German families were talking about a so-called kilometre rule; this means that the people had to choose a village at least 50 kilometres away from their actual home”. According to Pjotr, for instance, his ancestors originally came from somewhere in Western Ukraine.

An ethno-geographic map of Bessarabia, created by Dr. Lozovanu, shows that many of the former German villages simply vanished after the war. The remaining villages were mostly re-populated by a mix of Moldovans, Russians, Ukrainians, Bulgarians and some Germans. Following the dissolution of the Soviet Union in 1991, the former German villages faced similar problems to the rest of country: The rural population left for the cities or sought their fortune abroad straight away. For Dr. Lozovanu, this development constitutes a paradoxical back and forth: “In the 19th century, people from Germany, Austria and even Switzerland came to settle in Moldova. Today, it’s totally reversed; the local population, no matter which ethnicity, leaves for Western Europe and Russia”.

Walking through Marianca de Sus with Pjotr’s wife, Lydia, this phenomenon is clearly visible. Not even the foundations remain of most of the once over 60 houses. Professional demolishers removed the buildings to the last stone and resold the construction materials. “Do you see these two concrete columns? This is where the church stood”, Lydia points at a grass-covered hill at the main road where a cow is resting. She used to work in a small shop next to the church. Behind, in a small tree-covered strip, the graveyard tells the eventful history of the village. In its front part, new, neat graves with flowers are located; then follow less well-kept crosses from Soviet times. At the end, old weathered tombstones are scattered over a field. Most inscriptions are indecipherable but, here and there, old German writing is readable, dating back to around the turn-of-the-century.

By now, most of the Feller’s relatives and children work in Germany or Russia. When asked why they stayed, Pjotr answers determinedly: “You know, I am the last German living in Marianca de Sus. I’m used to this place and would be sad if I had to leave my house and property behind”. Life in the village is hard. Lydia and Pjotr are self-sufficient farmers, most of their daily food comes from their own garden, fields and livestock. All their other expenses have to be covered by the monthly pension of around 50 euros. Zaim, the closest village with a small shop and connection to public transport, is a five kilometre walk away. Still, Pjotr says: “I’ve been living here for 56 years, others leave, but I can’t. My roots are here”. 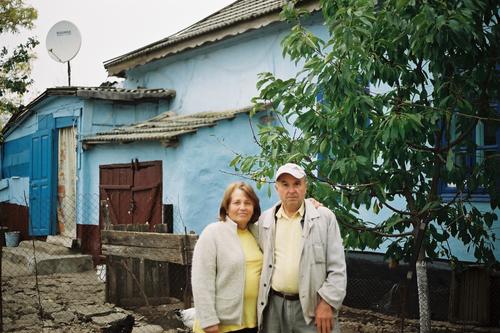 The Last German of Mariewka

Until 1940, around 150 German villages existed in the historical region of Bessarabia in the area of modern Moldova and Ukraine. Being abandoned and then repopulated after the war, they face the same problems today, as the rest of the country.
Read more